Overview of the nREPL

In this post I'm going to explain in a rough high level about how the nREPL you use every day actually works. This isn't intended to be 100% accurate, but close enough that you can build a mental model for understanding it when it goes wrong.

A common confusion is that lein repl is not the same as nREPL. When you run lein repl, two things happen:

The server aspect is the focus of this post. REPL-y is a terminal UI nREPL client, it allows you to evaluate code from the terminal. Another client is CIDER.el, which communicates via nREPL to enhance emacs with features. It also has an nREPL server extension, CIDER-nREPL, which is written in Clojure.

The nREPL has the notion of a transport. This is an abstract concept of communicating with the nREPL, for sending & receiving messages. The default transport (ergo most popular) is bencode over tcp. Bencode is a simple encoding format designed by Bittorrent for encoding torrent files.

It can be described concisely:

This provides a very simple format for reading data structures over the network. Other transports exist such as drawbridge, a HTTP transport; and nrepl-hornetq which provides a HornetQ transport for tools.nrepl server.

Each client has to support the various transports natively within it. Some clients are open to extension, but the primary transport remains bencode over tcp. I don't doubt this is related to the high cost of rewriting multiple transports for each client.

A message is simply a map; there are two kinds of message, a request and a response. There are common keys in a request message:

An unencoded request message to an nREPL server could look like this:

The nREPL server then handles this message however it pleases. I'll cover specifically how tools.nrepl handles this internally later in the post.

Responses have a similar shape. A single request can elicit many responses. When the request has finished being processed, it should include "done" in the list of :status values. It's important that the response :id is the same request as the :id, this allows a client to track particular responses, this is due to the nrepl server being asyncronous in design. You can have multiple requests in flight at a time. For this reason, it's important that the :id is globally unique, I generally use a UUIDv4.

For the example request above, I would expect 2 response maps like such:

Sessions persist dynamic vars (collected by get-thread-bindings) against a unique lookup. This is allows you to have a different value for *e from different REPL clients (e.g. two separate REPL-y instances). An existing session can be cloned to create a new one, which then can be modified. This allows for copying of existing preferences into new environments.

An easy mistake is to confuse a session with an id. The difference between a session and id, is that an id is for tracking a single message, and sessions are for tracking remote state. They're fundamental to allowing simultaneous activities in the same nREPL.

This section deals specifically with how tools.nrepl, the most popular implementation of nREPL, is implemented. Messages are handled via middleware. This will feel familiar if you have used Ring. 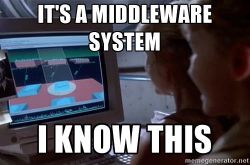 tools.nREPL middleware works slightly differently to how ring middleware works, because you can handle the message and pass it on to the next handler. This is because responses are asyncronous.

A :transport key is added to messages as they are handled. The value of this key is an implementation of a protocol representing the transport layer. By replacing the transport with a new one, middleware can control the responses of middleware after it. Usually the replacement delegates back to the original transport, after updating the message or doing something with it.

A message handler can set a descriptor upon itself. This is metadata which tools.nrepl uses to order middleware automatically and generate documentation.

:expects This specifies middleware which must be present after this middleware in the stack. Again, use vars or strings here.

:handles This is a documentation key. It includes text strings for human explanations of your returns, arguments, etc.

Using the :requires and :expects key, tools.nrepl is able to automatically order the middleware and handlers automatically. This is why you do not have to manually order middleware like so in .lein/profile.clj:

Piggieback is an nREPL middleware by Chas Emerick. It underlies the ability to execute Clojurescript over the nREPL. It's used in figwheel and boot-cljs-*

To launch a Piggieback session you clone the current nREPL session, and update a dynamic var in Piggieback. The dynamic var stores a repl env, which is a clojurescript protocol for evaluation.

Piggieback uses the nREPL middleware dependency system to specify that eval should be after it in the chain. This allows it to "hijack" an incoming eval. It will use it's dynamic vars to determine whether or not Clojurescript is activated.

If it's dynamic var is set, it will use the clojurescript api to send code to the repl-env. Usually, it's a browser env, so it will be sent to your browser for evaluation, the result will be captured by the javascript & sent back. This communication is done via websockets, out of band.

This setup allows you to evaluate Clojure and Clojurescript in the same nREPL, by changing the session you're using to control where the evaluation happens.

CIDER-nrepl's place in all this

CIDER-nrepl provides a lot of functionality which works around the limitations imposed by bencode, providing additional semantic data not available when using eval. All eval responses get pr-str'd in order to prevent issues with encoding.

For example, it turns the classpath into a bencode list, as opposed to to the string "(\"src/\" \"resources/\")" that you'd get from using eval to do the same thing.

It also bundles dependencies in a unique way, via Mr. Anderson, so that they don't conflict with your project. This means for example, that it brings tools.namespace in order to provide a refresh, without conflicting with the version already in your project.

The open design of CIDER-nrepl has allowed unexpected clients such as vim-fireplace to have a number of additional features with only integration effort.