Notes from a training course

The course started by introducing core.async and building up its concepts one at time, from buffers, channels, go-blocks and finally on to transducers.

We came up with some ideas for what a transducer might do in the context of a chat system.

Compared to the channel operations they replace, the nice thing about transducers is that you can test them with ordinary sequences before applying them against a core.async channel.

In order to get started quickly with the REPL, we generated a project using the sse template at modularity.org. This creates a project structure based on component, ideal for firing up a fast-feedback development workflow for writing servers. The sse template also adds dependencies on the stuff we needed. Less hacking around on setting up the environment means more fun with core.async.

We had soon developed the code to put chat messages onto a channel and take them off. The template provided a simple webpage under /events/ which allowed us to POST messages to the server, which in turn would put messages to a core.async channel.

We then added a go-loop to take chat messages from the channel and publish them, first to the console, and then as server-sent events via http-kit. 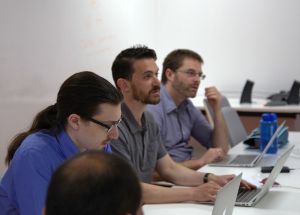 All the code for this can be found in our chatserver repository.

We generated a project skeleton using Martin Klepsch's excellent tenzing template. This provides a boot-powered workflow with a fantastic feedback-cycle for seeing the results of your ClojureScript efforts immediately in the browser.

From within the project directory :-

Helped greatly by our productive tooling, we plunged into ClojureScript and Om. Many of the team had no real experience with JavaScript or building front-end apps. But everyone got stuck in and we made steady progress, first with one Om component, then splitting it up into 3 with a core.async channel between the input box and the messages panel.

Putting it all together

Separating the work for building the server API from the work required for the front-end feels like a good split. For example, when you're building a front-end, it would help to pair-up with a UX designer, but this isn't necessary for back-end work.

But you still want to be able to integrate the two ends on your dev machine. Since both the front-end file server and back-end chat server were configured to listen on port 3000, we had to reconfigure the latter to use port 3001. 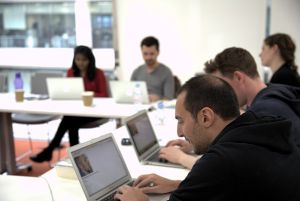 Fortunately, I had anticipated this being an issue and had purposely speeded along the CORS support in our yada library. Of course, there are plenty of established options to implement CORS in Ring servers, but I also wanted to demonstrate how easy it was to turn a core.async channel into a fully compliant HTML5 server-sent event feed, thanks to the magic of the manifold library that yada is built upon.

Using this feature meant we had to replace http-kit with aleph, but thanks to the similarities between the respective modular components meant that the code changes were minimal.

The enclosing component had already established a core.async mult, used to distribute messages to multiple consumers. This was stored under the :mult entry of the component record. Therefore, the code to create the server-sent event implementation was straight-forward :-

Not only was this code smaller and more readable that the http-kit equivalent, it also benefited from propagating back-pressure from a client connection. The result is back-pressure applied all the way back to the browsers sending the chat messages.

Once the code was in, it was time to test it.

(Note: it's very handy being able to turn common expressions like this into convenience functions in dev.clj.)

Once the server output had been verified, we hooked up the chatclient and the CORS errors disappeared. By the end of the course, almost all of us had fully functional web-based chat systems. Not bad for a few hours effort and a lot of fun too. 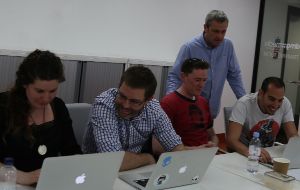 Again, all the code for the ClojureScript chat client can be found in our chatclient repository.

If you'd like to receive this kind of training from JUXT, just let us know, we'd be happy to help. Whether you'd like a course for beginners, or something to challenge seasoned Clojure devs, don't hesitate to get in touch (info@juxt.pro).