JUXT were proud sponsors of ClojuTRE again this year, and I was very happy to make the trip over to Finland last week to attend. And what an impressive event it was! I must say it ranks as one of the best Clojure conferences I've ever attended.

The talks were fun, inspiring, educational and entertaining, while the organisers did a great job of making everything work behind the scenes so the talks could take centre-stage.

The 20 minute per talk, single track format made for lively conversations in the breaks and at the after party - a format we've decided to adopt for our upcoming XT16 conference.

This is a quick write up of some of my personal highlights before my memory starts fading, a process accelerated by the alcohol consumed on both evenings. 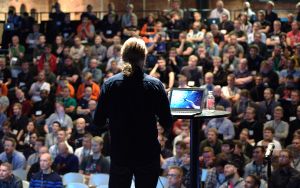 Such was the diversity of talks that I was left with the impression that Clojure is a language becoming ever-more versatile, rapidly improving and strengthening its advantages in its core niches.

After a welcome from MC Tommi and the Mayor of Tampere, Robert Johansson keynoted the conference with a talk on computerised psychology. I was heavily distracted with last minute preparations on my own talk which followed (if you've ever spoken at a conference, you'll know the feeling!)

After me was Yehonathan Sharvit, who introduced Klipse, a ClojureScript REPL in the browser. I hadn't realised until now that this project (and others I expect) have only become possible now that the ClojureScript compiler has been ported to ClojureScript. I wasn't the only speaker to realise that now it's possible to embed ClojureScript straight into HTML5 slide decks. Watch out for fancy animations and other cool stuff coming to a Clojure talk near you!

It was great to meet Simon Belak in the speakers' sauna the night before and he spoke authoritatively about his role as a data scientist. Data science was an early niche for Clojure, and Simon brought a refreshingly modern perspective on it. I liked his emphasis on reducing latency, going for rapid feedback to work with data in a tactile way. It certainly chimed with my own views on how we should be working with data. 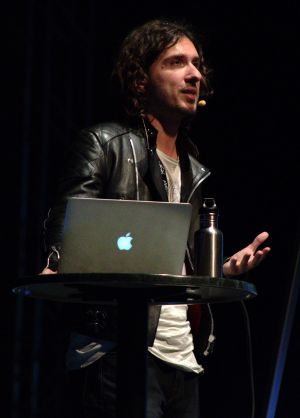 Markus Hjort gave an intriguing talk on harnessing Amazon's (server-less) Lambda technology to run a distributed fold, using a standard example of finding similar words (using the Levenstein distance). The results were interesting, he was able to get a good scale-out performance improvement from the tech. (up to a limit) and even revealed his Amazon bill at the end (spoiler: it's not expensive!)

One of my favourite talks of the conference was from Aki Helin. Aki's talk was a wonderful blend of history, ideas, jokes, memes, cultural references (Monty Python, check!) and a few 'wow' moments.

Nikita Prokopov is mostly famous for his DataScript database and his talk was on his Rum React-based ClojureScript library. Every time I get a swig of Nikita's Rum it tastes good: a modular set of 'mixins' for re-use (even for drag-and-drop), built-in support for server-side rendering. All in all, it's a very accomplished library.

Arne Brasseur gave an intro to clojure.spec. Personally, I haven't yet invested the time to learn spec so I was very happy to receive this free training as a member of the audience. Victor Eriksson gave a polished talk on React Native, full of the kind of wisdom you'd get only from a working practitioner.

Jarppe Länsiö was given the job of the warm-up act for David Nolen's closing keynote and delivered 100%. His talk was warm, funny and entertaining. But I took away a timely reminder of the JVM's amazing track-record in the world of what we now call IoT. Why are we struggling to write C programs on micro-controllers when we can be using Clojure! 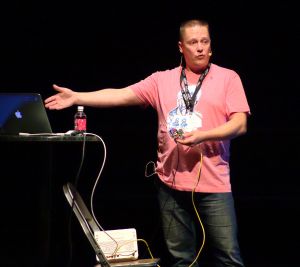 David Nolen's keynote contained a look-back on the last 5 years of ClojureScript while looking forward to what we might expect in the future. What really came across was David's humility, accomplished leadership qualities and how he has encouraged the contributions of over a hundred individual contributors to the project. David explained that he felt that ClojureScript had reached a level where it was indistinguishable from magic, even for him, aware as he is of how all the tricks work.

All in all, I think ClojuTRE 2016 will be remembered as a classic and sets a high bar for our own XT16 conference next month, but we're working very hard on the final preparations and it's looking great. So if you missed out on ClojuTRE this year, or you're already feeling withdrawal symptoms, we still have a few tickets left!. If you were at the ClojuTRE conference this year please use the coupon code CLOJUTRE for a special discount.