Using Clojure from the Beginning

uSwitch is a major supporter of the London Clojurian Community having used Clojure since it's early 1.0 days. They run regular coding dojos at their offices for newcomers to the language, and sponsor various community events and conferences (such as EuroClojure, ClojureBridge, and the Clojure Exchange). They frequently commit to open-source Clojure libraries and have also participated in the annual Clojure Cup.

The revolution at uSwitch began in 2010 after the company was acquired by Forward Internet Group. uSwitch's .NET monolithic systems were strangled and subsequently replaced with a system of microservices, written in Clojure, Ruby, Go and more.

As with the changes to technology, the organisation also transformed from being functionally structured to product-oriented; decoupling the business to make it more resilient and easier to scale. 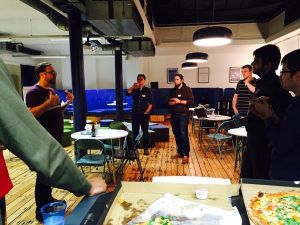 I caught up with Mike Jones, Paul Ingles, Ragnar Dahlen and Jon Neale for a spot of Q & A.

Microservices, the Monolith and Clojure

Jon Pither: What was the relationship between Clojure and Microservices at the beginning?

Mike Jones: Having small, independently replaceable services helped us to explore new ways of doing things and to experiment. Another big benefit was rewriting pieces would force us to understand the problem better. The new service would be closer to what the business wanted. We also found many cases of errors being present in the old system that nobody knew about.

Clojure was a great fit for lots our services: the functional style of transforming immutable data, functions that could do one thing and do it well.

Ragnar Dahlen: Clojure's philosophy has been really influential for us too. We really feel we've benefited not just from the language but the community and philosophy around it.

Paul Ingles: We began taking the philosophy of clojure in the small, at the code level, and applying it to our architecture. People in the Clojure community were talking about immutability and composability, it gave us a point of reference to describe what we were doing intuitively at the system-level with Microservices.

JP: What was it like when the organisation took on Clojure and developers had to learn it?

Paul Ingles: At Forward we used to get together to go through SICP or work through Project Euler. By the time we'd moved over to uSwitch we'd already been inviting more people to get stuck in. Pretty soon conferences and user groups started to appear so we tried to support as best we could with sponsoring, attending and ultimately, speaking.

JP: You've had Clojure expertise for a while now. How is the Clojure code faring on some of the more mature systems?

Jon Neale: Where we have big systems they are usually sustained by the various pieces being rewritten often. The conciseness of our Clojure codebases helps with this, typically being around 2k lines or less.

Conversely we've had some code around for 4 years that hasn't changed and is just solid.

Paul Ingles: We try to keep the individual pieces small enough that you can reason about them in isolation. Fortunately a lot of the things I work on these days are relatively short-lived or experimental: they generally end up small, and with simple enough data, that we could replace if it we ever had to.

Sometimes we look to replace things as we experiment with new ways of solving the problem, shipping logs from containers is a recent example. We've been through about 3 incarnations in as many months. Other times stuff just works and solves the problem and we're in no rush to just go back and replace for the sake of it.

JP: How has uSwitch found the hiring process for Clojure developers?

JN: We find that the quality of people coming through the door for interview is generally higher. We generally get high calibre developers interested in more than just programming, thinking beyond just their code.

MJ: The company must then be ready to take in developers of this mindset, to adapt to the individuals coming in who will want to make a difference. If you don't it's just a bait-and-switch.

PI: There's no guarantees of course but the quality is generally high. Clojure seems to be self-selecting in terms of talent, for now at least. Every community of developers has its quirks but we're pretty happy with the ones in the Clojure world.

MJ: We haven't had a problem finding candidates and there are some good agencies that specialise in finding functional programmers. Developers have also seen us at conferences and read our blogs, so we get a few candidates approaching us wanting to do Clojure.

JN: It was different to when we first started 6 years ago. Now we find that 70/80% of people applying have got Clojure on the CV. For us wanting to attract top people Clojure acts as a good differentiator and attractor.

JP: How do you think Clojure is doing in the UK?

PI: It feels like there's quite a lot of experience in London now. Perhaps there's fewer companies shouting about working with Clojure, although they are, just because its a bit less new now.

JN: It's definitely not just organisations used to being more cutting-edge nowadays, more banks are using it so it feels more mainstream.

PI: At conferences there's always a few companies I've not heard of and definitely not just ones in London so I guess it spreading. For us it's been brilliant and we're not likely to stop using it anytime soon.

The tooling and libraries have reached a level of safety where you're no longer looking over the edge of the precipice.

JP: What is the feeling as to what the state of Clojure is, and what recent or upcoming advances interest you?

PI: Clojure and the community have become so stable; the tooling and libraries have reached a level of safety where you're no longer looking over the edge of the precipice when you setup someone or something new. There's all kinds of training materials, lots of books, online exercises, and multiple conferences throughout the world.

JN: Getting a working setup is no longer an issue. Tools like Emacs Live and Cursive lower the barrier to entry and the more heavier class of tools have tremendous refactoring support.

Clojure is stable. The refactoring tools still being developed are interesting, and we'd like to try boot and spec. Maybe a big web framework is imminent (Arachne is upcoming).

PI: We probably err on the side of safer and simpler code. We're definitely not using all language features all the time, and definitely don't automatically adopt new tools without trying them out first.

In fact, when Mike Jones and I flew to Clojure-conj just as protocols were being added to the language we rewrote part of the energy pricing system to use them. By the time we'd landed we'd reverted everything back. Protocols weren't intended to solve that problem and we realised it once we tried.

We really value pragmatism: solve our problems and move on. We can get a lot done which helps the business to move faster.