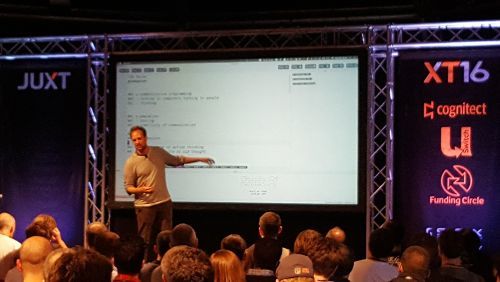 At JUXT we are big fans of Sam Aaron. I recall sitting on the back of his push bike as he pedalled me around the streets of Cambridge at high speeds so that I could catch my train, with a brief interlude of crashing in front of pack of enthused tourists.

Sam is bags of fun and excitement, as witnessed by the crowd at XT16 gathered to hear him talk about Communicative Programming.

In this day and age of raging debates about type systems, and frequent puzzlements about what Monads are, it's refreshing to hear Sam prioritise the lowering of cognitive load when it comes to accessing programming languages and our environments.

Code should be accessible to a five year old. Sam, who makes music by live coding at nightclubs, knows only too well the importance utilising a clear and simple programming language.

Enjoy his entertaining and philosophical discussion.